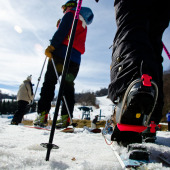 For many enthusiasts, the announcement of the festival inspires a whole lot of excitement, but for more than a few skiers unfamiliar with the sport, the question remains: what exactly is telemark?

“Great question! The answer probably depends on who you ask,” said Kristian Jackson of the High Country Nordic Association.

“It’s definitely skiing, however, practitioners of Telemark usually are proud to identify as a telemark skier. Telemark and downhill skis are cut from the same tree, so to speak. The difference is in the equipment and the nature of the turn.”

Jackson continued, “Telemark skis use a freewheel binding, one that only attaches to the boot of the ski via the toe. Before modern alpine bindings, all skis worked this way, but the telemark turn fell out of use when the parallel turn was introduced. This ‘free heel’ enables telemarkers to drop their knee in a telemark turn. It’s very athletic, and when done well, very graceful. The free heel allows telemark skiers to travel uphill on flats, allowing them to venture into areas beyond lifts.”

Now in its fifth year, the annual TeleFest strives to celebrate this unique athletic technique and keep it alive in a world where the normal downhill skiing reigns supreme.

“We started it in an effort to bring Telemark skiers together and celebrate the sport,” Jackson said.

“The HCNA used the first one as away to bring people together, meet each other, share stories, trip reports, borrow and buy and sell gear. We have grown in our following and now provide real time snow reports, photos of the area and we are working with Elk Knob State Park to promote their new cross country ski trails.”

The TeleFest will bring folks in from all over the southeast to converge on Beech Mountain Resort for a day of fun. The festival will include clinics for all abilities, a gear swap, group skiing, raffles and more. Also included will be a “Poker Run,” where participants receive a card for each run they complete. At the end, whoever has the best hand wins.

Registration for the event will be held on Feb. 7 starting at 8:30 a.m. Pre-registration is available at Footsloggers in Boone during a social event from 5-7 p.m. Tickets for TeleFest are $50 per person which includes a lift pass, t-shirt and coffee from Bald Guy Brew on Beech Mountain.