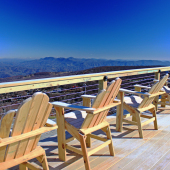 In addition to skiing Eastern America’s highest slopes, visitors to Beech Mountain Resort can now enjoy the highest ski bar in the East.

This winter marks the debut of ‘5506’ – a glass roundhouse named for Beech Mountain’s superlative elevation.

The facility was built by Umbrella Bars USA of Vermont and offers food and beverage service in heated comfort surrounded by glass panels. Furthermore, ‘5506’ sits on a new observation deck which is ideal for relaxing with friends and enjoying the view.

‘The cool thing is that it provides a break for skiers and snowboarders to rest at the top of the mountain and get a completely different perspective on skiing in North Carolina than what has been offered in the past,’ said Ryan Costin, the resort’s general manager.

The new facility allows patrons to take off their equipment and enjoy food and drinks inside the bar or at outside tables. It includes restrooms, which should be a big hit.

‘This concept is not uncommon in the industry, but hasn’t been pursued much in North Carolina and the Southeast,’ Costin said. ‘It’s generated a buzz. Everybody wanted to know what was going on at the top of the mountain.’

Beech Mountain has also increased its snowmaking ability by adding 12 new SMI Super PoleCat snow guns, upping the resort’s arsenal to 40 of the super high-tech guns. They work in conjunction with dozens of smaller guns to cover the slopes more effectively than ever before.

‘It has shortened our window to produce snow by almost 50 percent from where we were 4-5 years ago,’ said Costin. ‘We are able to open terrain at a quicker pace than we ever have.’

Those snowmaking upgrades will especially benefit the Oz slope on the mountain’s back side. There are now four PoleCats in place on the west-facing Oz run, a favorite of many skiers.

Another big change for the 2013-14 season is the streamlining of operating hours. BMR eliminated its daily session break, keeping the slopes open in the transition from day to night. ‘It gives us a consistent ski day with no break,’ said Costin.