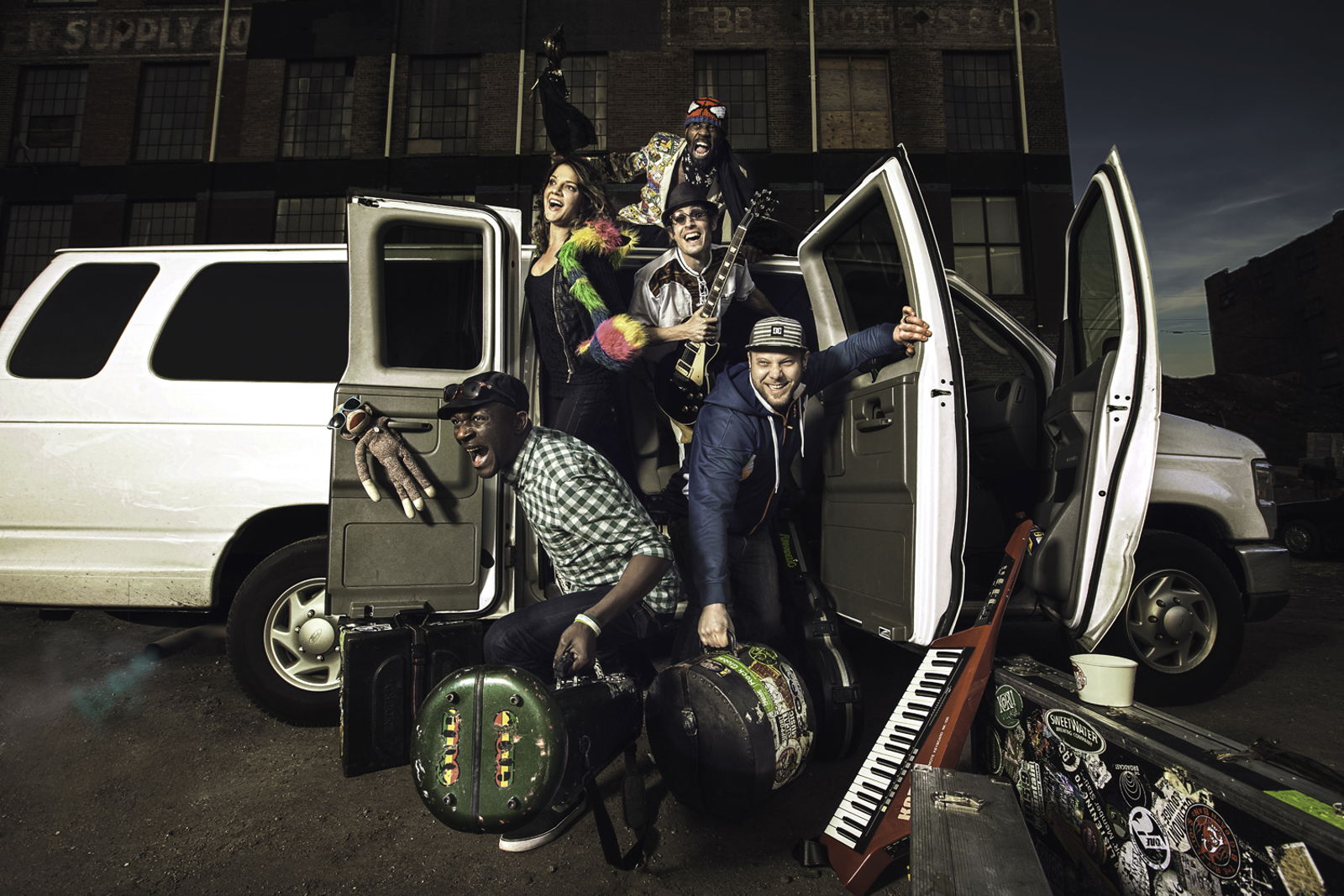 Funk has a new spokes band, and that band is Yo Mama’s Big Fat Booty Band. Known for their raucous live shows and outrageous stage wear, the Booty Band’s sound is a mix of deep funk, high energy rock, plus a little old school rap and soul thrown in for good measure.

Yo Mama’s Big Fat Booty Band formed in 2002 and went through a few incarnations before culminating into the dynamic ensemble it is today. Mary Frances “Mama Funk” creates a sultry platform for her keyboard and keytar playing with her powerhouse vocals. Laying down the bottom is Al Al “Sweet Nasty” Ingram on bass and vocals and Derrick “Dr Ock” Johnson on trombone. JP “Smoke Machine” Miller soars on guitar, and Lee “Insta Funk” Allen drives it all forward on drums. The five-piece funk rock outfit fuels their high-energy show with original compositions, triumphant horns, laid-back grooves and heavy backbeats.

In 2007, Booty Band released Now You Know, named album of the year by Home Grown Music Network, which also crowned the band its Band of the Year. The down and dirty album Doin’ It Hard came out in 2012 and was designated a top regional album by WNCW-FM, an influential Triple A radio station broadcasted across three states. Doin’ It Hard was followed by the totally funked-up remix Re-Doin’ It Hard.

On October 22nd, 2013, the Booty Band released their edgiest album yet. Onward! was recorded in the band’s hometown of Asheville, NC at Echo Mountain Recording Studio and engineered by Julian Dreyer (The Avett Brothers, Smashing Pumpkins). The album features eight tracks of intergalactic funk goodness with guest percussion by Mike Dillon (Les Claypool, Galactic, Garage A Trois). “Trunk Fallin’ Off”, the first single from the release, is a hard hitting tribute to classic rap and hip-hop. Al Al and JP spit lyrics over synthesized beats while Mary Frances holds down the hook. With a tip of the hat to old school hip-hop, the band pairs “Trunk Fallin’ Off” with an official video filmed at Atlanta, GA’s famed Clermont Lounge. Other standout tracks include “Let Me In,” where silky horn lines build into a driving psychedelic jam that give way to JP’s dirty guitar solo. “The Den” which splashes ambient jam themes with instrumental funk, and “Ante Up” which features the band’s resident Mama Funk on vocals. The sexy groove driven track will lure you onto the dance floor to bump up with someone special.

Never abandoning the call of duty, Booty Band is spreading the gospel of funk throughout the country by playing an average of 150 shows per year.