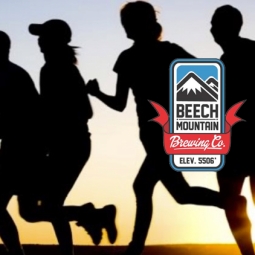 If youâ€™ve been feeling the pressure to join in the Race Craze sweeping the nation, but you don’t really like running, Beech Mountain has just the opportunity for you. Join your fellow almost-runners for the Beech Mountain Brewing Co. Hash Run (almost) 5K fun run on Saturday, July 19th.

Where else will you find a run that begins sitting down, immediately followed by drinking an ice cold beer with the beautiful view of Beech Mountain?

Youâ€™ll take your mark on the resort’s high-speed quad lift for a ride to the top, where you will be greeted by beer stop featuring one of Beech Mountain Brewing Co.â€™s finest brews.

Reach the finish line to claim your prize: a VIP pre-tasting of beers at the newly opened, recently re-modeled Beech Mountain Brewing Co.

Entry fee for the Hash Run-A-Beer Run is $40, $35 in advance, which covers the 5K, beers along the way, admittance to the Brew â€˜N Views beer tasting, an after party for all runners at Beech Mountain Brewing Co., and prizes in various categories. Buy Tickets Online.