The History of NC Skiing; The Way I Remember It 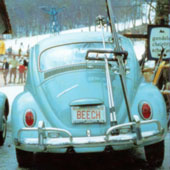 The story about the early days of Beech Mountain and the start of serious skiing in the southeast has been told time and again.

I remember it like this; Dr. Thomas Brigham, a dentist in Birmingham, Ala., grew up in New England and had learned to ski at the expert level. Living in Alabama and practicing dentistry, he was a long way from a slope and the opportunity to ski.

In the late 50s, Dr. Brigham learned of the discovery of a snowmaking machine in the northeast. He believed that with the elevation and climate in the mountains of North Carolina was perfect for snowmaking. The possibility of skiing down south was almost a reality.

He closed his practice and began the search for the ideal spot to build a southern ski area. He researched weather, climate and topography; he flew over the mountains of northwest North Carolina looking for a high, undeveloped peak with northern exposure and a layout suitable for building a ski area.

In 1961, Dr. Brigham started the process of acquiring property on Beech Mountain. He approached the Robbins brothers, developers of Tweetsie Railroad theme park, to help with the building of a ski resort. The brothers were developing Hound Ears Golf and Country Club when they decided to take on Beech Mountain development.

The daughter of Grover Robbins told me that her daddy did not like cold weather and was not interested in a ski area by itself, but wanted a year-round resort with activities like golf, tennis and swimming, in addition to winter sports. The Robbins brothers purchased additional property and formed the Carolina Caribbean Corporation to develop the assembled acreage of Beech Mountain.

Sometime around 1966 or 67, I remember my parents going with other couples on a ski trip to New Hampshire. I was relatively unfamiliar with the idea of snow skiing at that time. As the 70s approached, the ski craze was snowballing its way into the southeast and I would be caught in the storm.

Not long after their trip to New Hampshire, my parents planned another ski excursion to a small slope at Hound Ears Resort way up in the North Carolina mountains. They learned of a development planned for nearby Beech Mountain centered around a ski resort. They purchased a lot on Beech Mountain and became charter members of the Carolina Caribbean Club, which included complimentary skiing for the first season.

Developers saw skiing as a great marketing tool for land sales. Much of the property had been divided into residential lots; each one included club membership with amenities like skiing. My family, like many others, purchased a lot with skiing as the prime selling point.

Beech Mountain Resort opened slopes for skiing in the 1967/68 season. My family drove up every weekend from East Tennessee and began a long-standing tradition of skiing on Beech Mountain. It was a enchanting place. At the base of the ski area, an alpine village was nestled high on the mountain. In fact, Beech Mountain Resort has the highest elevation of any ski resort on the East Coast.

We learned to ski from Austrian instructors brought to Beech Mountain to add to the charm. They taught us how to snowplough turn, stem turn, and eventually make a stem Christie. To top off a day on the slopes the Austrian instructors, also musicians, played Tyrolean music during the aprÃ©s-ski at the Beech Tree Inn.

In the 60s, over 500 ski areas were built in North America. The 1960 Winter Olympics were held in Squaw Valley, California. In 1964, two Americans, Billy Kidd and Jimmy Heuga, won medals at the Olympics in Innsbruck, Austria. They were the first American men to take medals in the slalom.

At the 1968 Olympics in Grenoble, France, all watched Jean- Claude Killy win three gold medals on his Dynamic VR- 17 skis. That year, Stein Eriksen skied on the Today Show promoting Snowmass, a new ski area outside of Aspen, Colorado. Skiing was exciting and glamorous. It was growing and attracting more newcomers everyday.

Beech’s inaugural ski season took developers by surprise. With the surging growth of skiing in this country, the timing was right and the southeast was ready. The response to big-time southern skiing was enthusiastic. Transplanted skiers living in the south now had a ski mountain close to home. People from Florida to North Carolina came to the mountain to experience schussing down the slopes. Surrounded by mile-high views and majestic scenery, skiing in North Carolina had taken off.

Dr. Brigham eventually moved to neighboring Sugar Mountain to begin construction of another big ski resort in North Carolina. The little village of Banner Elk, nestled between Beech Mountain and Sugar Mountain soon became known as the ski capital of the south.

Beech Mountain’s early years were like nowhere else in the world. People came for the skiing and the atmosphere. In the early 70s, the men’s World Pro Ski Tour came to Beech. We shared the slopes with Olympians like Moose Barrow, Billy Kidd, Spider Sabich, and Jean-Claude Killy. The best skiers in the world were on Beech Mountain. A few years later, the Women’s Pro Tour visited Beech Mountain Resort. Memories of Beech, with mountain music, mountain spirits, and southern hospitality, traveled around the world in the wake of the tours.

Beech Mountain Resort has greatly evolved since its creation. In the mid-70s, Carolina Caribbean Corporation went bankrupt as it sent the earnings from Beech Mountain Resort to other ventures. The operation of the ski area changed hands several times until the present owners eventually purchased it. The biggest change occurred in 1981 when the Town of Beech Mountain incorporated the ski area in its boundary. Road maintenance and snow removal has been improving since then.

From the day Beech Mountain opened for skiing, changes in ski equipment, technique, fashion, snow making, grooming capabilities, and operating costs have occurred. Beech Mountain Resort has added other winter sport activities such as ice skating and snowboarding, but the greatest attraction has always been skiing.

The snow and weather conditions around here are as good as anywhere, and while I enjoy skiing in other parts of the country, I get great pleasure skiing in right here in North Carolina.

I have enjoyed skiing on Beech Mountain for over forty years. During that time, I have traveled to seventeen other resorts in seven different states, and have skied in many different snow conditions on varied terrain. I continue to love the sport and am thankful to have such fine skiing in the part of the country that I call home.