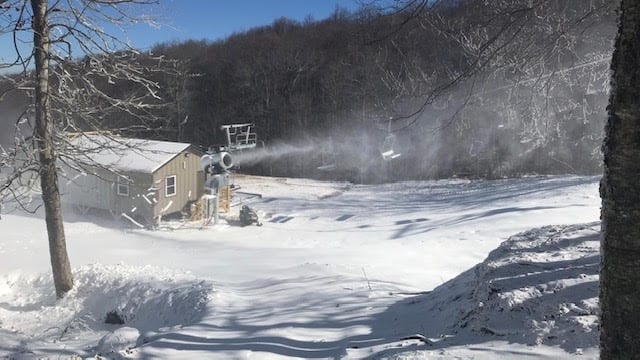 Beech Mountain Resort will open for skiing on Friday, November 23, operating from 9 a.m. to 5 p.m. daily.  Weekday pricing will be offered through the weekend.

This winter, the mountain has upped the ante with two brand-new chairlifts, multiple snowmaking upgrades, and new slope lighting.

In response to increased visitation over the last few seasons, the updated chairlifts will decrease time spent reaching the top of the mountain, increase the total number of skiers and snowboarders to summit, and increase overall riding comfort.

One of the main lifts that has been replaced, lift five, which ascends to the 5,506-foot summit and was originally built in 1987, will now offer 144 chairs with a six-and-a-half-minute travel time accommodating 2,400 people per hour.

Previously a double chair lift, the second of the two main lifts on the mountain, lift six, has now been switched to a quad chair lift. Also making the trip to 5,506 feet, lift six now features 106 chairs offering a six-and-a-half-minute travel time with a capacity of 2,000 people per hour.

Beech Mountain Ski Resort will hold a formal celebration and ribbon cutting for the new lifts on Dec. 1.

Other upgrades include more than 2,500 feet in snowmaking line and additional snowmaking machines. To top it all off, over 100 brand new LED slope lights will guide skiers and snowboarders as they descend the front side of the mountain.