Retro is not a bad place 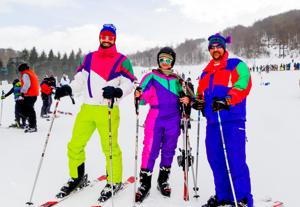 Out taking a Sunday drive with my nine-year-old son, I flipped the radio station and heard my junior high school years blasting again.

It was Culture Club’s “Karma Chameleon.”

And it was a part of a local radio station’s salute to the 1980s.

For real, dude, I was not much of a Culture Club fanatic.

Back in December 1983, when “Karma Chameleon” topped the charts, I was cranking up up the latest record by Molly Hatchet, Quiet Riot, Ratt or .38 Special.

But I did love Moon Zappa’s “Valley Girl.”

I consider Men at Work’s “Down Under” a classic.

And I think Michael Jackson’s “Thriller” is truly among the best albums ever made.

I also have an appreciation for the musical stylings of “Karma Chameleon,” a song I rediscovered about five years ago when all of America seemed to first start digging into ’80s culture again – in earnest.

For a while, it appeared, the 1980s showed up all over our TV screens.

“The Cosby Show” aired in endless repeats — until scandals surrounded the show’s star.

You could also catch many airings of “The Dukes of Hazzard” — until television executives got afraid of a flag that was then used, in the early 1980s, to represent southern pride.

Even “Dallas,” the biggest show of the decade, returned for a couple of years in a continuation series on TNT.

Politicians, especially Republicans, love the 1980s. Virtually every candidate has mentioned the presi-dent of nearly that entire decade, Ronald Reagan, with utmost reverence.

Well, for one, I’m quite the fan of the big hair that came around in the late 1980s.

At the movies, this decade also gave us greats like “E.T.” and the original Rambo movie, “First Blood,” plus the totally awesome “Fast Times at Ridgemont High.”

This coming weekend, you can step back in time and celebrate all that is great about the 1980s at the mile-high elevation of Beech Mountain, North Carolina.

There, on Feb. 18-21, you’ll find the fifth annual Totally ’80s Retro Ski Weekend as the town and its ski resort combine for a retro experience.

Everywhere you go, expect to hear 80s-era music as visitors hit the slopes in their DayGlo ski gear and dust off those old school threads for a full schedule of concerts and contests.

On Feb. 18, you can catch a concert at Fast Eddie’s featuring Cassette Rewind, followed by a Feb. 19 show starring SPANK, an East Tennessee retro band, performing at the Mile High Tavern. That night, you can also enter the $200 Madonna Look-Alike Contest.

Saturday’s headliner on Feb. 20 at the ski resort is ’80s Explosion, playing the big hits from the 1980s – complete with big hair. Saturday night also features the Totally Retro Apparel Contest with a $500 first-place prize for the person show shows up wearing the most authentic ’80s-era outfit.

For sure, this party ranks as the most popular ski weekend, said Talia Freeman, the marketing director at Beech Mountain Resort. “People love it because it encourages them to step outside their shell – and have fun.”

Previous Post
80’s Retro Ski Weekend
Next Post
Breakfasts of Champions: 12 Places to Fill Your Tank Before Hitting The Slopes