A Vision of Mountain Biking 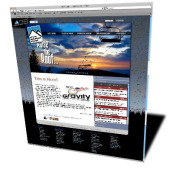 The nostalgia associated with Lance Armstrongâ€™s comeback from cancer still resonates as you pass â€œGo Lanceâ€ on the grueling 1600 ft. climb up Beech Mountain. This symbol quickly reminds us of the days of the Tour Du Pont and the epic NORBA mountain bike events, which were held in Beech Mountain with great pride in the 1990â€™s. These fond memories, combined with the continued success of two local, nationally known, powerhouse collegiate cycling teams, unite the Town of Beech Mountain, with a common goal of advocating recreational, competitive and safe cycling. Â

Although the passion for cycling in the area never subsided, competitive cycling has long since been a recreational staple of the area, and racing has been nonexistent for over a decade, since the last NORBA event. However, in 2009, our community began to see change with the creation of the â€œBeestâ€ Time Trial and Beech Mountain Resort Triple Crown Mountain Bike Race Series. In 2010 Beech Mountain was also fortunate enough to play an active role in hosting two USAC sanctioned stage road race events, the Tour Du Life and Cycle 4 Life Mountain Top Race Weekend, a USAC sanctioned downhill series. In addition, Beech Mountain hosted the Three Peaks Race -â€œAmericaâ€™s Hardest Cyclocross Raceâ€, and conceived the first event of many more to come on the international XTERRA series.

The diagram below shows eight major cities in the southeast, their population, their distance to Snowshoe Mountain Resort and their proximity to Beech Mountain Resort.

Collegiate cycling has grown greatly in the southeast and more importantly in proximity to Beech Mountain. In addition to the nationally renowned cycling programs at Lees-McRae and Appalachian State, Lees-McRae College recently implemented an academic minor in bicycling studies.

The diagram below shows four colleges and universities with cycling programs, their distance to Snowshoe Mountain, and their proximity to Beech Mountain Resort.

The mission of the Beech Mountain Resort Bike Park is to provide users with a unique, diverse system of sustainably safe trails for recreational and competitive mountain bike use.

Beech Mountain Resort is proud and excited to work with Christopher Herndon on the construction of the facility. We believe that Christopher Herndon will provide an innovative design, combined with a flawless build, enabling the resort to maintain itâ€™s standard of perfection. www.gromracing.com (Take a look at his junior developmental team and his bio)

The facility will cater to the most advanced riders, but the main focus will be toward a beginner trail system. The idea is for a beginner rider to be able to ride the lift up with the most advanced rider, rolling their bikes off the trays, only to take a separate route to the base of the mountain. Beech Mountain resort will provide a unique atmosphere, driving the most competitive racers to the mountain, but more importantly, a facility that caters to the all beginner enthusiast. We will produce a facility that can introduce people to the sport, while maintaining the interest to the advanced. We will produce a beginner trail system that is easy enough for someone to take part on his or her first day.

Currently, Beech Mountain has over ten miles of trails, including cross-country and downhill, with a majority of our terrain un-touched. The land is seemingly endless and diverse, enabling us to offer something truly unique. In addition to our downhill, cross-country, and beginner trails, we will offer a 4x and a pump track. This will enable us to also cater to BMX. Each year, we will expand in these areas.

Construction will start in early summer in order to be ready for our grand opening and qualifier, scheduled for August 20, 2011. This will be a qualifier for nationals, in correlation with the grand opening of the facility. This event will include music, beer and wine tasting, and other entertainment for all ages. The Tourism Development Association of Beech Mountain has agreed to contribute a matching 15k towards our initial marketing dollars for the facility and events. This will also greatly increase the visability of the park and Monster Energy. Our digital media kit is almost complete. The media kit will highlight our resort, the bike park, the Monster Energy Detachable Quad lift and Trays, Grom racing, Christopher Herndon, and our vision for the future. To say we will take an aggressive PR approach will be an understatement. A media tour will take place on August 20, 2011. Currently, we have seven journalists attending. I would like to attack the media nationwide, ensuring ample exposure for the facility and also for Monster Energy.

With the success from 2011, the bike park will operate on weekends in June, July and August. Beech Mountain Resort will reintroduce its race series leading into USAC nationals, making it a part of the PRO GRT series. The partnership with Christopher Herndon will provide a continued expansion of a unique trail system. An innovative marketing approach combined with aggressive public relations will bring the park added exposure and traffic. Beech Mountain Resort will offer an unmatchable product that will surpass its competitors leading into year two of hosting USA Cycling MTB nationals.

Park Operation will expand to a minimum of five days a week, opening June through September. The continued expansion of the trail system will provide press worthy information to media outlets, ensuring interest from the gravity community. A Specialized rental fleet and opening of a bike shop will compliment the park as well as providing a more inviting atmosphere to beginner enthusiasts. Beech Mountain Resort will expand their race series and continue to offer unique events and unmatchable terrain to the gravity community.