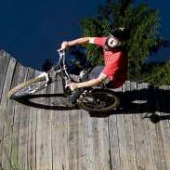 The resort will begin construction of the facility in preparation for the championships, which will bring mountain bikers from around the country to the area. Brevard native Christopher Herndon, 2007 Dual Slalom National Champion, and a Southeast leader in course design, will oversee construction. ‘We feel confident that Christopher Herndon will design a unique facility ensuring that Beech Mountain Resort will produce an innovative product,’ says Costin. Beech Mountain Resort will offer a world-class venue for competitors in a spectator-friendly atmosphere, filled with plenty of family-friendly activities.

Beech Mountain Resort is excited to share this event with the Western North Carolina community, and will soon provide local cyclists with a mountain bike destination in their backyard.

‘There is a lot of untapped terrain on Beech Mountain, ultimately providing a unique facility for Gravity Nationals,’ said Shaw Brown of Boone Bike and Touring. ‘We are thrilled Beech is producing a legitimate Mountain Bike facility in the southeast.’

Michael Thomas, a Boone resident and 2008 and 2009 collegiate downhill champion, said: ‘This will be the first time that the National Championships have ever been held in the South, and it’s a big step forward in the progression of downhill racing here. We have great mountains to ride in, but actual downhill specific trails to ride on have been very limited until now.’

Go to the Event Page
Previous Post
Thanks for Another Amazing Season!
Next Post
Summer improvements for a better skiing experience