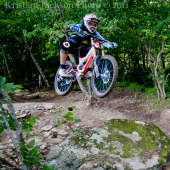 Racers will compete for national titles in cross-country, short track cross-country, dual slalom, downhill, and the team relay. At the end of the three days, individual and team omnium champs will be crowned.

The highest resort in the eastern United States, Beech Mountain just successfully wrapped up its first summer of bike park operations and is thrilled to step in as the new host for the 2013 Collegiate Mountain Bike Nationals. It looks forward to sharing its diverse and unique trail system with America’s collegiate mountain bikers.

Will you vie for one of the 24 national titles up for grabs? For registration, visit www.usacycling.org.