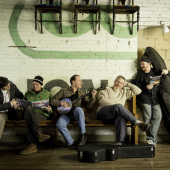 The third annual Bikes, Brews ‘n’ Views festival at Beech Mountain Resort is expanding into a three-day weekend of events in 2013. This year’s festival offers up a quality tasting of music on the slopes. Read the full story on Bikes, Brews & Views.

Melissa Reaves – Melissa Reaves is known to audiences throughout the US and Europe for her avant-garde, fire driven’, deconstructionist approach to rock-n-roll. Reaves has amassed a word-of-mouth following most notably for her experimental guitar work but also for her propensity towards spontaneity and seamless improvisation during live performance. She deconstructs the blues, pushes jazz to the outer limits and burns through rock-n-roll like the love child of Jerry Lee Lewis and the MC5. The real deal! Melissa’s, ‘New Rock Song’ was placed on the 55th GRAMMY Awards nomination ballot for Best Rock Performance … Read More

Known for its high-energy, positive sound, Acoustic Syndicate delivers a genre-defying performance, masterfully blending its eclectic influences with trademark finesse that only 17 years of cohesive teamwork can bring.

Acoustic Syndicate is the product of Cleveland County’s McMurry clan. Guitarist Steve ‘Big Daddy’ McMurry is joined by his cousins, Bryon McMurry on banjo and Fitz McMurry on drums. The three McMurrys also bring a trademark vocal trio that only a lifetime of singing together can deliver … Read More

Brushfire Stankgrass – Mixing analog effects with bluegrass backbeats, the music of Brushfire Stankgrass is instantly unique. The band’s debut album, ‘One for the Salamanders,’ reached #2 on the Relix and jambands.com airplay charts in 2011, remaining in the top 5 for two months. The album also was voted as one of the top 100 albums of 2010 by WNCW listeners and was a top ten regional release of the year. ‘One for the Salamanders’ is currently available from all major online music stores … Read More

The Broadcast – The Broadcast are a ground shaking, soul-driven powerhouse. Forming in NYC during 2010, the group relocated to the emerging cultural mecca of Asheville, NC to pursue music full time. Propelled by the thunderous and explosive vocals of lead singer Caitlin Krisko, this sensational 6-piece played to crowds all over the US last year, tallying over 140 shows.

A dynamic ensemble that mixes elements of all-out rock (Led Zeppelin), neo-soul (Grace Potter) and classic songwriting (Fleetwood Mac), The Broadcast not only recalls the raw energy of live performance before the digital age, but also breaks new ground with a combination of inspired musicianship and a velvet-throated voice of gold.

Their highly-anticipated new album, Dodge the Arrow, will be released in the Fall of 2013. … Read More

Zach Deputy – On his new release Another Day (Eusonia Records, 2011), Zach Deputy demonstrates his extraordinary ability to perform and record in multiple contexts and conveys the sensibilities of a mature singer/songwriter. Another Day offers another look at Zach Deputy and seeks to help him cross over into other audiences. Rich with ballads and mid-tempo songs, the music on this recording is best described as soulful rhythm and blues, with flavors of Al Green, Taj Mahal and Stevie Wonder emerging in the swells, changes and modulations of the music, in the voice and even in the lyrical content. The record will appeal to fans of contemporary artists like Jack Johnson and Amos Lee, but the origins of the style and feel remain classic … Read More