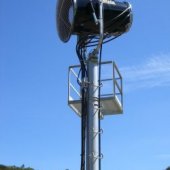 BEECH MOUNTAIN, N.C. – A new system of automated snow guns will have a major impact on snowmaking capacity this winter at Beech Mountain Resort. The resort, which is the highest ski area in eastern North America, has added six SMI Super PoleCat guns for 2010-2011. General manager Ryan Costin is excited about the new guns based on the performance of two installed last year. ‘The automated PoleCat system is able to produce copious amounts of snow. The guns added last year were the highlights of our snowmaking,’ Costin said. ‘Now we’ve upped that 300% by installing six more. The nice thing is this system is self-monitoring and constantly controls the output. It really increases our snowmaking capability.’ Last season’s snowmaking upgrades paid big dividends on the Robbins Run and Upper Shawneehaw trails. This year, the resort set its sights on the long, black diamond White Lightning run, along with the Lower Shawneehaw trail, Powder Bowl and Freestyle trail. ‘We’re almost 100% better than three or four years ago because of the new automated system, plus we still have PoleCats that operate on carriages,’ said Costin. ‘In addition, we’ve added 40 JCI tower guns the past couple years, and dozens of Ratnik guns. Significant money has been invested in snowmaking over the last 36 months. It’s paying off in the finished product.’ Also receiving attention was the alpine village at the base of the slopes. Three outside businesses moved in to lease a trio of storefronts. Skiers can now take advantage of a new equipment rental operation, coffee cafÃƒÂ© and souvenir photo shop. Meanwhile, new lockers were installed in the locker rooms, a third lane was built on the snow-tubing run and a shipment of ski/snowboard equipment was added to the rental fleet. ‘We’ve really focused on bringing our offerings to a higher level,’ Costin said. ‘A lot of time was spent this summer painting buildings and on general facility upkeep to give the resort a fresher look. The Beech Tree lounge was painted for the first time in 25 years. We are focusing on the details. We not only work here, most of us live here so we have a vested interest.’ Costin said skiers are excited about another season on the Oz trail, re-opened last year on the mountain’s back side. ‘I never realized how popular it was until we re-opened it,’ he said. For Beech Mountain skiing info, call (800) 438-2093, or visit: www.skibeech.com. For general info about Beech Mountain, call (800) 468-5506.