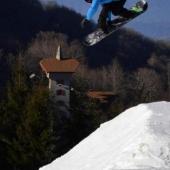 Beech Mountain Resort is marching forth into spring with two budget-friendly initiatives for skiers and snowboarders.

Beginning March 4th and continuing for the remainder of the ski season, the resort will provide one youth (12 & under) lift ticket at no charge with the purchase of every adult lift ticket.

Also beginning March 4th, weekday pricing will be in effect seven days a week for the remainder of the season.

Beech Mountain enters the month with near-record amounts of snow for early March. Meanwhile, the ski area is forecasted to receive several inches of natural snow the first five days of the month.

‘This is the most snow we’ve had in March for years,’ said marketing director Talia Freeman. ‘It’s crazy how much snow is out there.’

Another bonus for skiers and snowboarders awaits. The resort has decided not to make snow during ski sessions the entire month. Any snowmaking activity that occurs will take place at night or early morning.

‘We want to provide the best skiing possible with clear conditions under blue skies,’ Freeman said.

Although Mother Nature has the final say in the matter, officials at Beech Mountain Resort have set a goal to stay open well into the second half of March.

‘As long as the weather cooperates and there are people on the slopes, we will stay open,’ Freeman said.

For complete information on skiing and snowboarding at Beech Mountain Resort, visit: www.beechmountainresort.com or call (800) 438-2093.