Will Young Hired as Director of Food and Beverage

Beech Mountain, NC – Fresh off being named on the Brewers Association’s list of the “50 Fastest-Growing Small and Independent Craft Breweries in the U.S.”, Beech Mountain Resort is announcing a reconfigured Taproom and Grill.  To help facilitate these exciting changes, Beech Mountain Resort has named Will Young as the new Director of Food and Beverage. Young brings over 15 years of culinary and brewing experience to Beech Mountain Resort and is most noted for his prior ownership of Blind Squirrel Brewery.

Joining Young will be Zack Shytle, who has been named Brewery Operations Manager.

The changes include integrating the Beech Tree Bar and Grille into brewery operations.  The newly named Beech Mountain Brewing Co. Taproom and Grill is located next door to the Brewhouse and will serve as the main taproom and restaurant.  The resort is also creating more green space and outdoor seating between the two facilities so patrons will now be able to easily walk back and forth, further enhancing their enjoyment of this unique mountain setting.

With Young and Shytle at the helm, the combined facilities will feature a larger beer selection, a rejuvenated menu and a highly-enjoyable atmosphere. The new menu will feature a variety of salads, wraps, pizza, burgers, Sunday brunch items and much more.

“I couldn’t be more excited to join the leadership team at Beech Mountain Resort,” says Young. “I have been skiing on Beech Mountain since I was a young child, so the legacy of the resort really resonates with me. I am thrilled to bring another layer of added value to the already diverse and exciting offerings found here on the Mountain.” 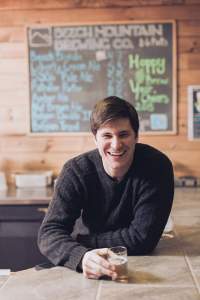