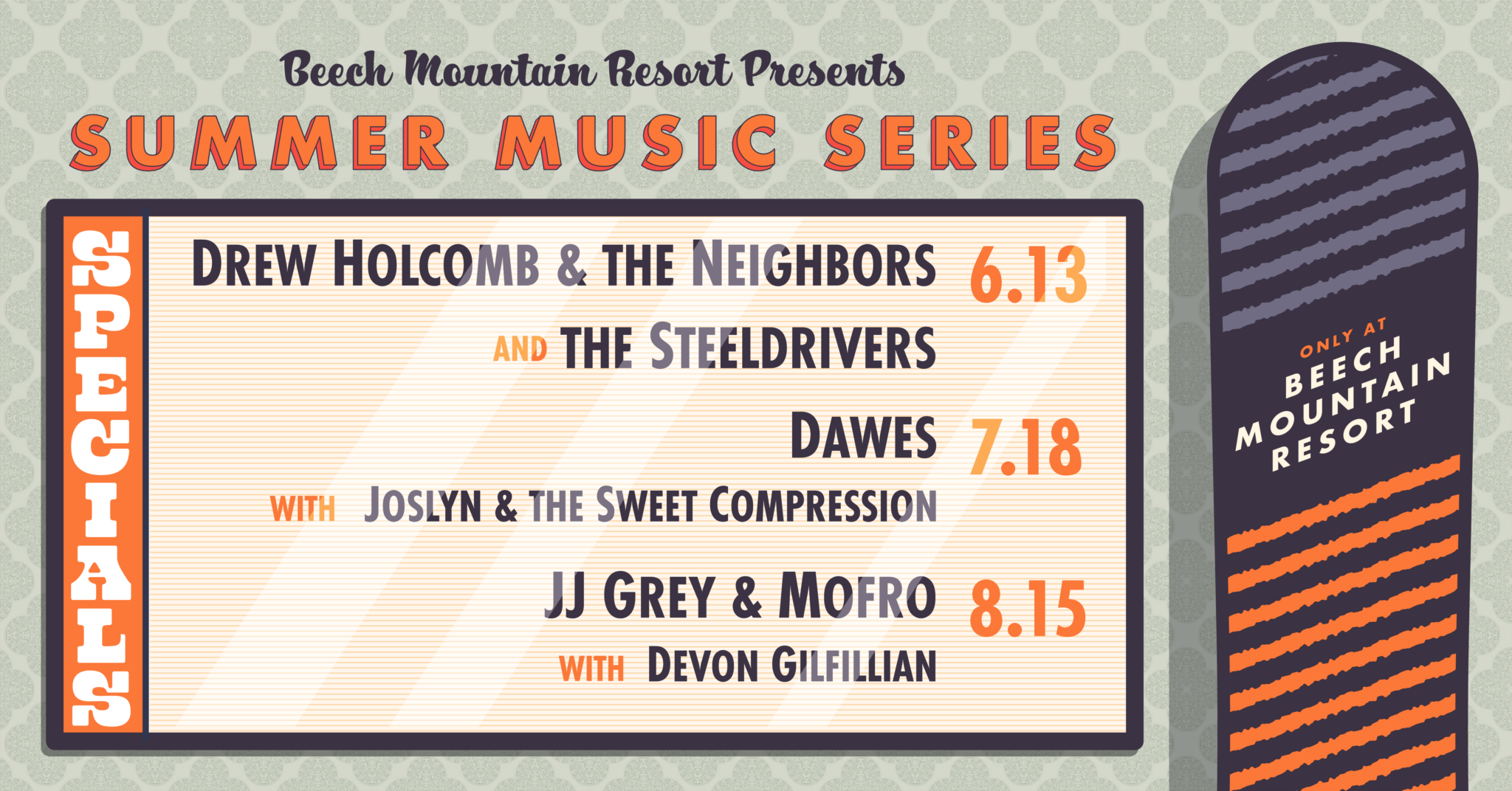 There will be a FREE after party in the Taproom & Grill. Drinks and food will be available for purchase.

This years beneficiary is Mountain True. Special thanks to our sponsors, Root Down Hair Studios and Appalachian Mountain Brewing Co.

Onstage, Grey delivers his songs with compassion and a relentless honesty, but perhaps not until Ol’ Glory has a studio record captured the fierceness and intimacy that defines a Grey live performance. “I wanted that crucial lived-in feel,” Grey says of Ol’ Glory, and here he hits his mark. On the new album, Grey and his current Mofro lineup offer grace and groove in equal measure, with an easygoing quality to the production that makes those beautiful muscular drum-breaks sound as though the band has set up in your living room.

Despite a redoubtable stage presence, Grey does get performance anxiety—specifically, when he’s suspended 50 feet above the soil of his pecan grove, clearing moss from the upper trees.

“The tops of the trees are even worse,” he laughs, “say closer to 70, maybe even 80 feet. I’m not phobic about heights, but I don’t think anyone’s crazy about getting up in a bucket and swinging all around. I wanted to fertilize this year but didn’t get a chance. This February I will, about two tons—to feed the trees.”

When he isn’t touring, Grey exerts his prodigious energies on the family land, a former chicken-farm that was run by his maternal grandmother and grandfather. The farm boasts a recording studio, a warehouse that doubles as Grey’s gym, an open-air barn, and of course those 50-odd pecan trees that occasionally require Grey to go airborne with his sprayer.

For devoted listeners, there is something fitting, even affirmative in Grey’s commitment to the land of his north Florida home. The farms and eddying swamps of his youth are as much a part of Grey’s music as the Louisiana swamp-blues tradition, or the singer’s collection of old Stax records.

As a boy, Grey was drawn to country-rockers, including Jerry Reed, and to Otis Redding and the other luminaries of Memphis soul; Run-D.M.C., meanwhile, played on repeat in the parking lot of his high school (note the hip-hop inflections on “A Night to Remember”). Merging these traditions, and working with a blue-collar ethic that brooked no bullshit, Grey began touring as Mofro in the late ’90s, with backbeats that crossed Steve Cropper with

George Clinton and a lyrical directness that made his debut LP Blackwater (2001) a calling-card among roots-rock aficionados. Soon, he was expanding his tours beyond America and the U.K., playing ever-larger clubs and eventually massive festivals, as his fan base grew from a modest group of loyal initiates into something resembling a national coalition.

Grey takes no shortcuts on the homestead, and he certainly takes no shortcuts in his music. While he has metaphorically speaking “drawn blood” making all his albums, his latest effort, Ol’ Glory, found him spending more time than ever working over the new material. A hip-shooting, off-the-cuff performer (often his first vocal takes end up pleasing him best), Grey was able to stretch his legs a bit while constructing the lyrics and vocal lines to Ol’ Glory.

“I would visit it much more often in my mind, visit it more often on the guitar in my house,” Grey says. “I like an album to have a balance, like a novel or like a film. A triumph, a dark brooding moment, or a moment of peace—that’s the only thing I consistently try to achieve with a record.”

Grey has been living this balance throughout his career, and Ol’ Glory is a beautifully paced little film. On “The Island,” Grey sounds like Coleridge on a happy day: “All beneath the canopy / of ageless oaks whose secrets keep / Forever in her beauty / This island is my home.” “A Night to Remember” finds the singer in first-rate swagger: “I flipped up my collar ah man / I went ahead and put on my best James Dean / and you’d a thought I was Clark Gable squinting through that smoke.” And “Turn Loose” has Grey in fast-rhyme mode in keeping with the song’s title: “You work a stride / curbside thumbing a ride / on Lane Avenue / While your kids be on their knees / praying Jesus please.” From the profane to the sacred, the sly to the sublime, Grey feels out his range as a songwriter with ever-greater assurance.

The mood and drive of Ol’ Glory are testament to this achievement. The album ranks with Grey’s very best work; among other things, the secret spirituality of his music is perhaps more accessible here than ever before. On “Everything Is a Song,” he sings of “the joy with no opposite,” a sacred state that Grey describes to me:

“It can happen to anybody: you sit still and you feel things tingling around you, everything’s alive around you, and in that a smile comes on your face involuntarily, and in that I felt no opposite. It has no part of the play of good and bad or of comedy or tragedy. I know it’s just a play on words but it feels like more than just being happy because you got what you wanted — this is a joy. A joy that doesn’t get involved one way or the next; it just is.”

Grey’s most treasured albums include Otis Redding’s In Person at the Whisky a Go Go and Jerry Reed’s greatest hits, and the singer once told me that he grew up “wanting to be Jerry Reed but with less of a country, more of a soul thing.” With Ol’ Glory, Grey does his idols proud. It’s a country record where the stories are all part of one great mystery; it’s a blues record with one foot in the church; it’s a Memphis soul record that takes place in the country.

In short, Ol’ Glory is that most singular thing, a record by JJ Grey—the north Florida sage and soul- bent swamp rocker.

There is deep soul in the music of Devon Gilfillian—but for the talented Nashville-based singer-songwriter and bandleader, that descriptor goes way beyond a mere genre classification.

Growing up in Philadelphia on a steady diet of R&B, hip-hop, rock, blues, and soul music, Gilfillian gravitated to records that ignited his mind while making his body move. For him, listening to the towering icons of his musician father’s era—Ray Charles, Stevie Wonder, Otis Redding, The Temptations—was just as formative and exciting as discovering the new sounds of his own generation, and the beats and rhymes made by rising rap stars like Wu-Tang Clan, Kanye West, Notorious B.I.G., and Jay-Z inspired him in new ways. He began to recognize a connective thread in the sounds he loved best: from the golden throwbacks sampled by the hip-hop beat makers to the raw, emotional vocal deliveries of the Motown greats, for Gilfillian the key ingredient seemed to be the “soul”—not simply the genre, but the feeling and vibe.

Following his electrifying 2016 debut EP with upbeat singles like “High” and “Troublemaker” in 2018, Gilfillian signed to Capitol Records and hit the road––performing with the likes of Anderson East, Keith Urban, Gladys Knight, Kaleo, The Fray, Mavis Staples, and more. In early 2019, Gilfillian traveled to Africa to find healing and inspiration before headlining a tour in Scandinavia and opening for Brothers Osborne on their spring tour. His debut album, “Black Hole Rainbow,” is available now. 2020 dates include a tour with Grace Potter, appearances at notable festivals, and headlining in North America and beyond.